2019 EP SERIES (FOR MOTOCROSS); A GREAT SUCCESS FOR THE WEST! 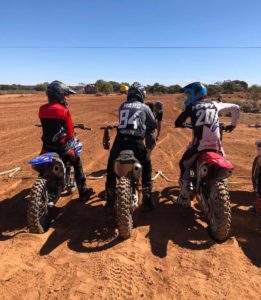 The calm before the storm! (pic credit – Kelli Hoffrichter)

South Australia’s west coast clubs have held the 2019 EP Series (Eyre Peninsula) for motocross and was well supported over the three rounds, hosted by the Port Lincoln, West Coast (Ceduna) and Whyalla clubs. Riders from as far as Crystal Brook, Roxby Downs and Adelaide attended each meeting that helped bring rider numbers to almost 150 for the series, and all commented how much fun they had riding at the country clubs. This is a true reflection of the hospitality of the members and the hard work they all put into the preparation and running of the Series.

All three clubs had tough weather conditions to deal with due to event being run in the heat of a drought, with no rain to assist with dust control so endless amounts of water, read truck loads, went into each track, but it was a battle.

Pt Lincoln rebuilt its track with a new layout that proved to be a winner with all competitors enjoying the more flowing and new passing opportunities available. National rider Izac Maule came and competed and showed how fast a MX bike can be ridden with fellow riders and spectators amazed at his skills.

Ceduna (West Coast MCC) hosted round two and was a good practice run for their South Australian Championship round later this year and also had a top national rider Daniel Banks attend. Daniel rode with great speed and style to take the win and as always looked very smooth and casual while on the bike.

Whyalla was the last round and this was where all the hard work for the riders added up to their well-earned titles and for the annual club shield to be presented. All classes were hotly contested with some amazing racing throughout the whole series and to all riders’ credit done cleanly without any incidents between competitors.

A huge thanks, from all 3 clubs, must go out to all the people that helped at each event, without these dedicated volunteers the series simply wouldn’t happen, with the interclub assistance amazing to see.

Also to all of the sponsors that helped each club, it is always desperately needed and greatly appreciated by all involved.

The 2019 EP Series final results are;

The overall Club points went to Pt Lincoln with six class wins five second placings and two third places so a big congratulations to those riders from Pt Lincoln club.

Whyalla came in second place with Ceduna in third position but at the end of the day it only really mattered about the riders’ enjoyment and the spirit between the fellow country clubs,

All 3 of the Eyre Peninsula Clubs extend the invitation to any riders in the state to come and ride their club days. Or if you like compete in our next EP Series we are sure you will be surprised at the competition and hospitality available .