AUSTRALIAN SENIOR SPEEDWAY SOLO CHAMPIONSHIPS – THE RETURN WITH A VENGENCE

You are here: Home / News / AUSTRALIAN SENIOR SPEEDWAY SOLO CHAMPIONSHIPS – THE RETURN WITH A VENGENCE
Back 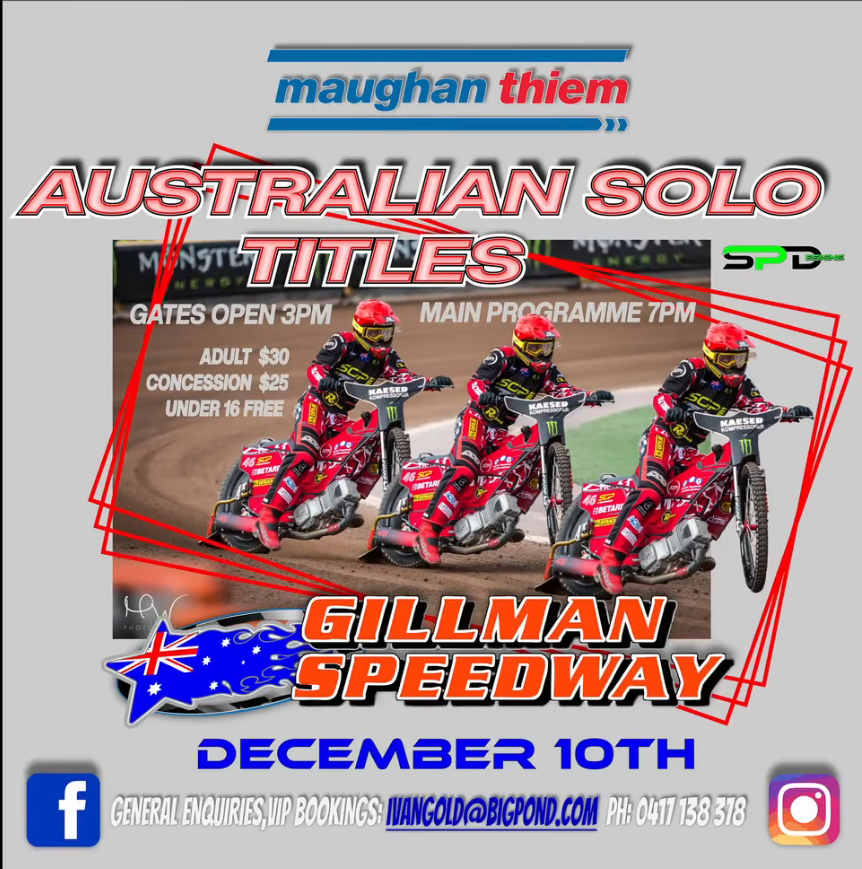 It’s been a long hiatus of 2 years the Australian Solo Championships have not been able to be held due to Covid rocking the World of Sport. This Saturday night 10th December 2022 riders are descending on Gillman Speedway from all corners of New South Wales, Victoria and Queensland to take on our South Australian hometown Speedway heroes.

Defending Australian Champion Max Fricke (Victoria) is hoping to make up for the 2021 Covid Championship break and make it a clean sweep of National Titles after an exceptionally challenging time missing the last Grand Prix of the season in late September due to a horrific crash sustained overseas earlier that month. Fricke is definitely a fighter coming back from a list of injuries a mile long including cracked shoulder blade, concussion, broken sternum, sprained shoulder bruised lungs; proving he is not a competitor to be taken lightly.

Fricke can’t relax with Former World Under 21 Champion Jaimon Lidsey riding into Gillman on a high, setting his targets after taking out his second Victorian Championship at Mildura and the last Gillman Solo Championship.

The finals are looking to be an event not to be missed if four-time Victorian Champion and dual South Australian Title Champ Justin Sedgmen has his way. He has been on a heater and hungrier than ever after being a Runner up at the Gillman and Victorian Championships in recent weeks.

South Aussie young gun and former New Zealand under 21 champ Jake Turner is looking at bringing home the title in front of Family, Friends and his SA fan squad lining up with Fraser Bowes who recently returned home after his impressive winter in Poland making 3 semi finals this Season. Both SA Champs are keen to send the tourists packing and show they’re not to be messed with.

Queensland Team are a real strong mixed bag of diverse riders being led by Australian Under 21 Champion Keynan Rew, teamed with Zane Keleher and Winner of the Queensland and New South Wales Under 21 Championships Tate Zischke are looking for every opportunity to score points and mix up the pack.

New South Wales contingent see’s Zach Cook who is fresh back from overseas will be joined by Maurice Brown, Michael West, James Pearson and Harrison Ryan.