DALLAS SKEER ALSO HAD A CRACKEN WEEKEND AT MAC PARK IN THE WET – HERE’S HIS REPORT …..

You are here: Home / News / DALLAS SKEER ALSO HAD A CRACKEN WEEKEND AT MAC PARK IN THE WET – HERE’S HIS REPORT …..
Back 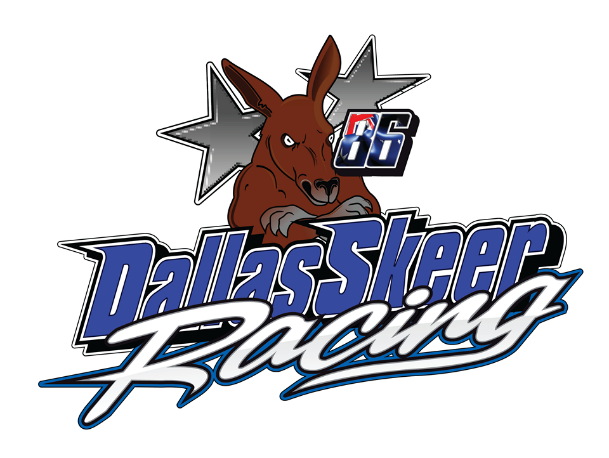 DALLAS SKEER ALSO HAD A CRACKEN WEEKEND AT MAC PARK IN THE WET – HERE’S HIS REPORT …..

The first race meeting in 6 months due to Covid took place last weekend and it was great to see the lights go out again. This was round 3 of the SA state titles and I didn’t compete in the first two rounds so there was nothing to lose.  With Mac Park being able to hold race meetings and all other racing being delayed I was really looking forward to three days at the track to get back into the swing of things. It’s a great time to make sure the teams ready for when racing does resume. The weather certainly threw everything at us with a dry but windy Friday practise going pretty well for myself.

Even though the first session was wet Friday the rest of the day was dry with track temps of around 25 degrees giving good confidence. I had done a few days at Mac Park over the last month leading up to the state titles so I knew what to expect on Friday. It was good to get straight back onto the pace being able to do 1min.10sec lap times and being close to my PB in the second session. Once I had done that I was happy to just dial in some consistent lap times in the last session feeling confident for Saturday qualifying. 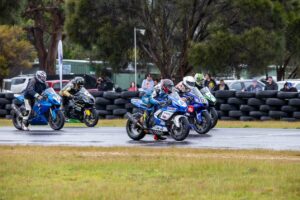 Saturday morning was wet as predicted and it had been a year since the last time I rode in the wet so I decided to go out in the first of two 10min qualifying’s. I was able to go fastest by a second and was on provisional pole. The final qualifying looked to be wet as well but with high winds and no rain the track was half dry so we opted for the dry bike. Due to Mac Park having a high amount of grip I was confident with this decision. I went out using the first couple of laps to feel out the conditions and then started to get more confident and push the front coming into corners. The first half of the track was pretty damp with a slight dry line and the second half was quite dry, so I knew I didn’t have to push hard in the first two sectors and still make it up later on. It obviously worked as I was able to do a 1min.12.216 and go fastest giving me pole for not only Supersport but also the main 15 lap Sunday feature race against the superbikes.

The first of three six lap races on Saturday couldn’t have gone much better leading from as soon the lights went out and pulling out a gap to second. Being fully dry I started feeling pretty comfortable straight away was able to lap in the 1min.10’s for the last four laps. I wanted to make the most of the good condition’s to try and break my current Supersport 600 lap record, but I wasn’t able to put a good lap together until the last lap. Making small costly mistakes all race until lap 6 where I was able to pull together a 1min.10.161 which made me want a 1min.9  more in the next race. I finished a comfortable 1st by 16 seconds.

Exactly the same scenario in race 2 on Saturday where I was able to pull away from the start focusing on my lap times. With the wind really picking up I knew it would be hard to do much better than race one but I put in some low 1min10’s with a best of 1min.10.043, 0.003 off the lap record on the second to last lap! There was one more lap so that was my last chance and unfortunately pushed a little too hard just hitting the edge of the grass at the exit of turn 2. I was able to bring it back on and got a bad tank slap while coming back onto the track due to the lip of the bitumen, so had to run straight on at turn 3. Was able to re-join and had a big enough gap to stay in the lead and still win. I wasn’t happy that I threw the lap away but still happy to basically match the lap record.

Unfortunately that was the last of dry track time for the weekend with Sunday being very wet and I hadn’t ridden in the wet for a year since the last Master of Mac Park. I seemed to have the Supersport class covered with three wins from three races with the last race being Sunday morning which was wet. I got the wholeshot once again and was able to come away with a seven second lead and a best time of 1min.16.481. This gave me the round win for the Supersport class. I had previously done a 1min.15 in the wet so was confident to fight for the win the in the last 15 lap feature race against the superbikes.

There was a very heavy shower just before our last race so a delay was had to let it pass and check the track as it was fully wet with big puddles. Luckily the race still went ahead but I did not make the most of pole position. Trying to make the best start possible against the bigger superbikes I wanted to have the clutch in the perfect spot but was a little too far out and started to roll. So I quickly grabbed the brake and then the light went out before I could release the brakes and instantly dropped back to fourth off the line. I knew straight away the front two would start to check out while I moved to third into turn 1 on lap 2. There was already a three second gap to the next rider. I started to close while doing PB lap times in the wet but couldn’t sustain the pace while getting rear tyre movement coming out of corners. I rode the last ten laps by myself passing the lapped riders and had to settle for third. A new PB wet time of 1min.14.692 after a couple of mid 1min.14 lap times was a good takeaway from the race.

Overall it was a good weekend with quick lap times being done after so long off the bike and dominating the Supersport class, plus getting third against superbikes in the wet. Can’t thank dad enough again, as usual he prepped all the bikes and got them ready but for the first time I was at a race meeting by myself as he was busy. In these tough times it’s really reassuring to have good sponsors still providing backing even though racing has been very limited. So I can’t thank them all enough: 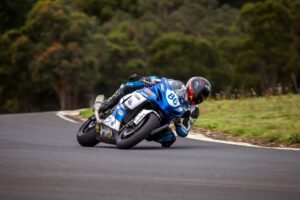 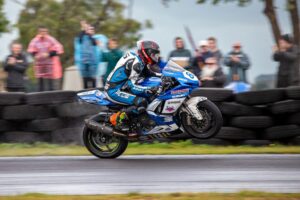