EP MOTOCROSS SERIES, ROUND 2 AT KIMBA WAS HOT TO TROT!

You are here: Home / News / EP MOTOCROSS SERIES, ROUND 2 AT KIMBA WAS HOT TO TROT!
Back 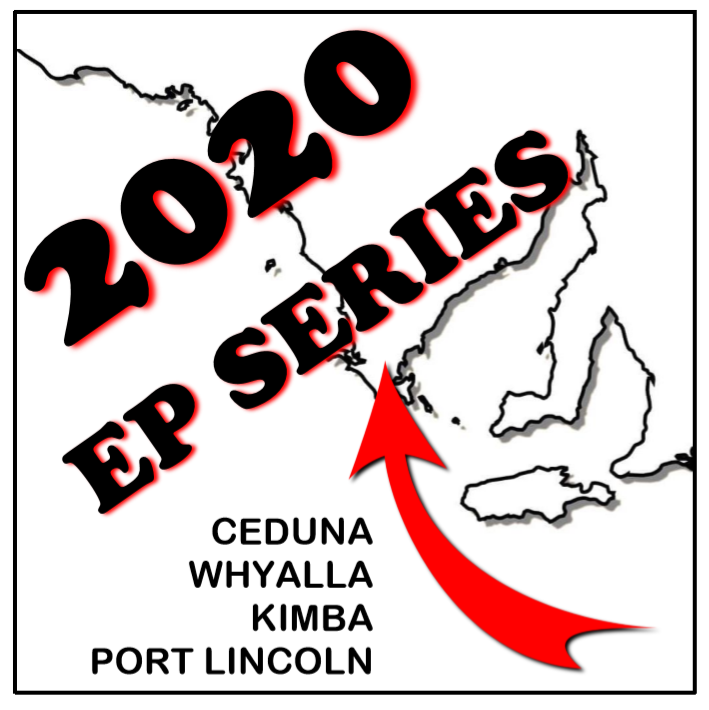 KIMBA EP MOTOCROSS SERIES, ROUND 2 AT KIMBA WAS HOT TO TROT!

The EP motocross series headed to Kimba for round two of racing and riders were greeted with perfect racing conditions. With a huge amount of work put into the preparation of the track and facilities from the local Kimba Council and the local members the riders were very impressed.
The day started off cold and wet but the action out on track was fast and furious with some of the states best riders showing up for a pre state title hit out with super tight action in the City Motors first corner and the Pt Lincoln 4WD tabletop jump.

50cc 7-U9yrs was dominated by young Declan Smart and Kylan Miller with Riley Mullen in hot pursuit ever lap. Young Tao Letton pushed hard to take fourth place but just couldn’t match the other boys speed. The two Ellerington brothers also rode great races and are improving every time out on their bikes.
65cc 7-U9yrs had the same result with Declan out front and Kylan and Riley scrapping for the minor placings. These boys showed great skills and stamina to ride two classes all day on such different machines as one is an auto and the 65 a manual so great stuff boys.

65cc 10-U12yrs had Koby Miller out in the lead from Blake Phillips who was chasing as hard as possible but Koby was just too fast.

The girl’s class was mixed in with the boys and young Nicole Modystach was riding with great speed pushing Koby every race. Sari Letton was also in the mix, like she always is and first-time racer Danielle Churchette put in a great day’s ride.

85cc/150cc 9-U12yrs was won by Ian Ellis who rode three great races and Koby Miller showed great improvement on his 85cc bike. Third place went to young Caleb Churchett and Haden Frost took out fourth place with this being these two boys first ever race day.

85cc/150cc 12-U16yrs This was a great class of racing with the top five riders all dicing for the placings but Axle Dean in first and Jacob Knowles and Jaxon Simunovic taking the minor places. Local rider Brodee Zibell was in the fight and took out fourth placing and has made big improvements in his riding.

Junior Lights was a great class to watch with the future stars of our sport pushing each other every lap with young Jack Lienert taking the win. Liam Buckley and Banjo Lawrence took the minor placings with Seth Gregory and Liam Frost improving every lap. The boys showed excellent skills through the Kimba Transport whoops and jumping the AG Save step-up. 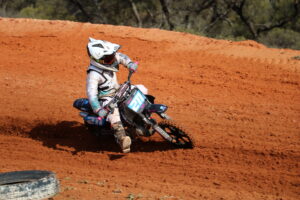 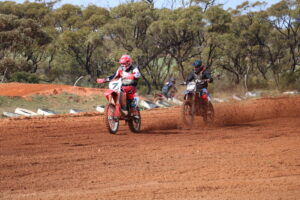 (Left) Declan Smart gets on the gas in the 50cc 7-U9 Class, while John Barnes leads Adam Maclean in the Vets Class (Right)

Veterans Class was a tough class with Adam Mclean taking the win from John Barnes and Clint Letton in pursuit every lap. With 250cc and 450cc mixed together there was lots of roost blasted onto the trailing bikes on the Lienert Contracting straight. One of the rides of the day went to Adam Delongville who never gave up no matter where he was placed.

250cc Clubman was won by Eric Brereton from Angelo Karoussis and Pearce Reichelt taking the minor placings with some great racing.

450cc Clubman was dominated by Luke Story winning all races from Luke Bizewski and Mark Phillips who had great battles every race.

Expert 250cc class had Kai Newbold out front with Zac Hoffrichter and Sam Tilbrook trying hard to keep pace. Kai was last years state champion and he showed why with amazing skills and speed in all parts of the track and even raced the 450cc class on the 250 and pushed the bigger bikes to the limits.

Expert 450cc had three of the best riders in the state and Kai put on an amazing show of MX racing skills. This class was bar to bar racing with the Kemp Constructions second corner a hot place to be off the start with all riders fighting for the front spot. Siegah Ward took the win from Mitch Norris and Joshua Tilbrook in third place but any of the riders could’ve won. Siegah took the rider of the day award for his consistent and clean racing on display.

A massive thanks must go out to all of the sponsors that donated all the prizes and the helpers on the day and weeks leading up to the event. To the local Ambulance crew and Kirsty for arranging the team to look after any injuries that might arise. The Kimba Council for your support of our amazing sport and welcoming our club to put on the event.

The Wild Wild West hope to see a huge field at Whyalla on September 20th for round 3, and round 4, to be held on October 23 at Port Lincoln.