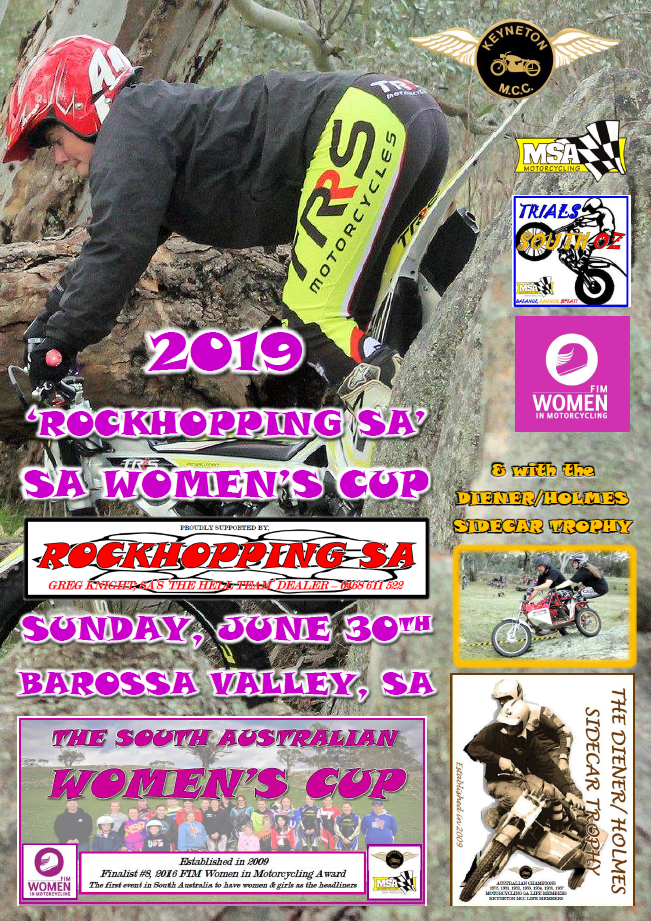 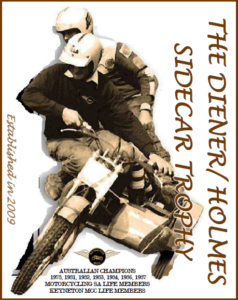 The Keyneton Motorcycle Club, along with Rockhopping SA and Motorcycling SA are excited to announce that entries for the 11th South Australian Women’s Cup & The Diener / Holmes Sidecar Trophy, to be held on Sunday, June 30th at Eden Valley, are now open.

For our Eastern states friends, this is also the first weekend of your school holidays, so SA would love to see all of the girls and women that ride head over for this great event, and camping options will be available from Friday night!

First run in 2009 this is the very first event in South Australian motorcycling where the girls and women headline the event and has twice been nominated for the FIM Women in Motorcycling Award, in 2016 (finalist) and 2018.

Through its history so far, the event has attracted over 70 girls and women from all states of Australia to ride, including the absolute legends of women’s trials in Australia, Bev Anderson, Michelle Coleman and Kristie McKinnon, as well as almost all of those who have represented Australia at the Trials des Nations (Ailsa Anderson and Jenna Lupo are the 2 missing), which includes SA’s own Sofie Kraft and Lillie Yiatrou. 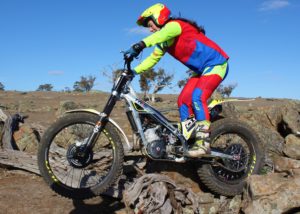 Trevor Diener and Philip Holmes are the Keyneton MCC’s greatest Champions, with 7 Australian Championships to their name as a sidecar team, and one each separately, for 8 each in total, and, they were also 10 time South Australian Champions and were never beaten in the Peter Sparkes Sidecar Trophy, and all in a career that only spanned a little over 11 years together as a team!

The naming of the Diener/Holmes Sidecar Trophy in 2009 was made to coincide with the Keyneton MCC 2 Day Trial, as it was at this event in 1988 that the curtain was drawn on their extraordinary career, with a fine farewell victory over the, then, newly crowned Australian Champions of Lawson & Gould from Western Australia.

The Diener/Holmes Sidecar trophy will once again feature the 3 classes; A Grade (red & white line), B Grade (black & yellow line) and Classic (black or run of section), with a Classic Sidecar defined by having an air-cooled motor and no sidecar wheel brake. 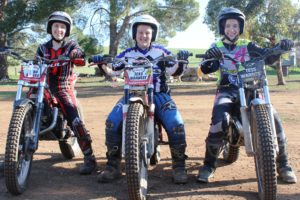 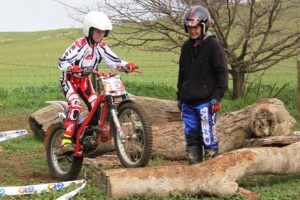 Also confirmed since the sup regs were approved is that the crew of Café Dee Wheels will be the caterer for the day with their awesome burgers, complete with homemade sauces & chutneys.

This year the event moves to a venue that hasn’t been used since 2004, on Jutland Road at Eden Valley, so for the majority of the riders, this will be brand new to them, with many of the awesome trials juniors not even having been alive in 2004.

The venue will lend itself to great viewing and a relatively easy walk around the rocks down to the creek and back!

Also new for this event is that this will be the first trial in SA to use Ridernet as the entry point, with riders able to enter the event through this link; https://bit.ly/2QaPt4L

So, log into Ridernet with your licence number and follow the prompts to enter & please note the following points with this system;

For anyone using the Ridernet system to enter an event for the first time, and has any issues as they go, don’t hesitate to call the MSA office, 8332 9000, and the staff will walk & talk you through the process.