SIDEWINDERS PUT ON AN AWESOME WEEKEND OF SKIDZ WITH NSW’S BEAU BAILEY CROWNED THE AUSTRALIAN UNDER 16 125cc INDIVIDUAL CHAMPION AND WESTERN AUSTRALIA THE TEAMS CHAMPIONS FOR 2022!

You are here: Home / News / SIDEWINDERS PUT ON AN AWESOME WEEKEND OF SKIDZ WITH NSW’S BEAU BAILEY CROWNED THE AUSTRALIAN UNDER 16 125cc INDIVIDUAL CHAMPION AND WESTERN AUSTRALIA THE TEAMS CHAMPIONS FOR 2022!
Back 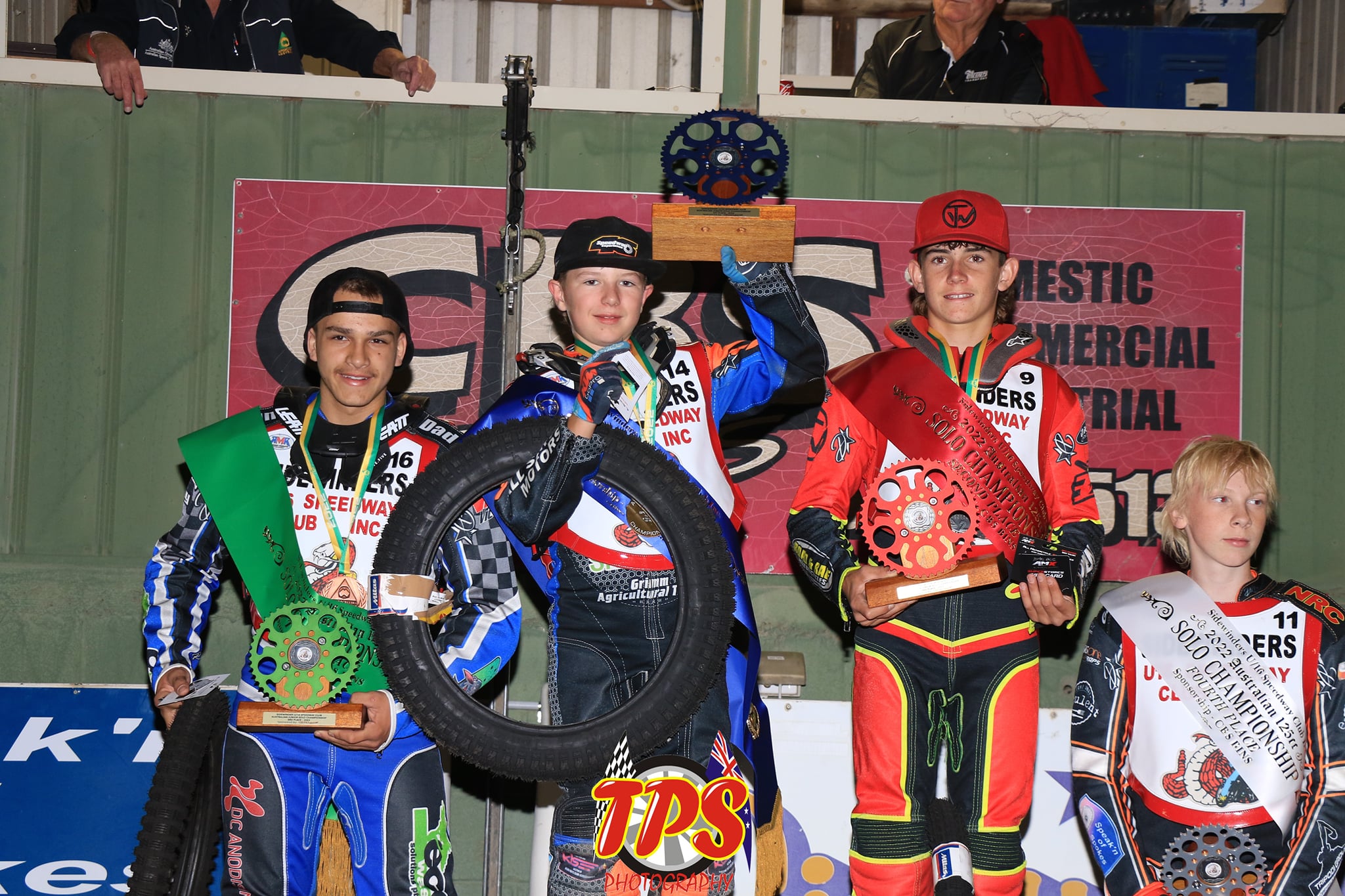 The weekend of April 1-3 saw the Sidewinders Junior Speedway Club host the CBS Bins 2022 Australian Under 16 125cc Championships, both individual and teams – and what a huge weekend it was for some outstanding and talented speedway sKidz from around Australia.

Friday night saw a quick practise session happen just for the 16 riders and 2 reserves who were taking part in the Individual Championship on Saturday evening, with many of the interstate riders never having ridden on a track with a fence before, but all came to grips with the Sidewinders surface quickly, and were singing the praises of the junior specific venue (the only one of its kind in Australia).

It didn’t take long for the favoured riders in the Championships – Bailey, Sadler, McDiarmid, Jansen-Batchelor, Grabham, Loftus – to all look comfortable as they sized each other up in readiness for Saturday night’s ‘hostilities’, while Anika Loftus and Darcey Timmis were also looking each other over to see who would come out of the Championships with the Aussie #1 speedway girl bragging rights.

With a huge amount of work by the dedicated crew from Sidewinders, Saturday dawned fine but cool, with track prep continuing during the day, led by Roy Stout, who continued to cut laps on the grader and water truck to prepare, what turned out to be, a brilliant surface to go sideways on!

As the sun slowly set, a huge crowd flowed through the gates and quickly filled Graham Baker Hill in anticipation for a great nights racing – and with round 1 of the Championship kicking off under a brilliant sunset, the 2022 Championship was underway.

And in a relatively incident free night – only a couple of laydowns and no injuries – with some fantastic rides by all who entered (and all 18 riders need to be congratulated for such a high standard of competition), the scores at the end of the heats were as follows – with not one rider scoring a maximum on the night!

With the scores as above, this meant the 3 riders to advance straight to the final were, the pre event favourite, Beau Bailey, WA’s Mitchell McDiarmid and local Ashley Jansen-Batchelor, with the semi-final to see who would be the fourth rider in the final made up of current SA Champion, Harry Sadler, Noah Grabham from NSW, Jordy loftus from QLD and the 3rd Croweater to make the semis, Kobi Canning.

Sadler out of red led the semi from tapes up to never be headed, but the battle raged behind him for part of the journey as Canning had a cracking start from the outside gate to put himself into second going down the back straight for the first time, but Grabham wasn’t going to be denied and went inside going into turn 1 on lap 2 and by the end of the 2nd lap had the job done, with Canning then having to fend off Loftus for the final half to finish in 3rd.

This meant Harry Sadler went into the final, making for 2 South Aussies in the final, and with Kobi finishing 3rd in the semi, it made for 3 locals in the top 6, or 50% – a huge effort by all concerned!

After the support events did their thing while the finalists did their final preparations, it was then time to crown the Australian Champion for 2022 – with the final line up looking like this

When the tapes went up to get the final underway, Bailey & Jansen-Batchelor made the best starts, but the pole line was the deciding factor with Bailey using it to full advantage to ensure he came out of the turn in front. McDiarmid also stuffed it up the inside of Jansen-Batchelor in turn 1 to put himself back into second by turns end, and with this pushing Jansen-Batchelor wide, it left Sadler with nowhere to go and he couldn’t make any move.

And that is the way it stayed for the duration, with Jansen-Batchelor all over McDiarmid until half way and Sadler all over Jansen-Batchelor as he tried to find a way round, but it was to no avail and as he crossed the line to a great cheer from Graham Baker Hill, Beau Bailey won his first Australian Championship – and then celebrated with a lap with the chequered flag – and a cool ‘doughy’ as well!

All riders spoke well at the presentations, which were hosted by emcee and commentator, Paris Charles, with the presentations done by Adam Possingham, Sidewinders President & MSA’s Speedway Sports Manager, Ivan Golding, MA Speedway Commission member, and Steve Baker from CBS Bins. To once again have CBS Bins involved as naming rights partner to the Championships is fantastic for the sport here in SA, and the Sidewinders Club as well.

The awesome trophies were made by Roy Stout, and the 4 riders who made the final also received a $50.00 voucher from AMX Superstores’s Blair Athol store, with a huge thanks to Beckz for making that happen. It certainly added to the event to have AMX Superstores involved, with the marquee looking the goods!

In the battle of the girls, Anika just finished in front of Darcey to have bragging rights as Australia’s #1 speedway girl for the next 12 months, although Darcey did get the only heat win between the girls in a top ride during the night.

Not even 12 hours after the individual Championship was decided, 14 of the field from the night before were back at Sidewinders for the Australian Teams Championship, as 7 State Teams took on each other across 6 rounds of heats – with each team of 2 riders going head to head with another team on track (so still 4 riders), with the idea to get a maximum of 5 points per ride (your team finishing 1st & 2nd) to maximise the score for your team – with 30 points the maximum score possible.

To say that Sunday, in many ways was tougher then the night before would not be stretching it, as the riders were now in their 3rd straight day of sKidz, and with all aged 14 or younger, the fatigue was certainly starting to show, with a number of crashes marring the action – with, fortunately, all riders unhurt.

Add into that warm conditions and 6 rides with no support classes, it was a huge 3 hours of action to finish the weekend. When the dust had settled (there was none really – the track was once again on prime condition), the team from WA of Mitchell McDiarmid and Linkin Metcalf had gained a little revenge on the SA team of Harry Sadler and Ashley Jansen-Batchelor, as Hazza and Ash had grabbed the Championship back in 2020 on the WA’s home track, so it was only fair the result was reversed this time.

In 3rd place and completing the podium as the NSW team of Individual Champ, Beau Bailey and Noah Grabham, with Beau apparently a little sleep deprived after the excitement of the night before – which is probably understandable when you win your first Australian Championship – but again, what was great to watch was that no team went ‘maximum’ with the result going right down to the final heat.

Adam Possingham was once again on hand to present the awards, joined this time by David Bitmead and Mark Baker, with this being special as it was Mark & David’s fathers that originally built Sidewinders, and they both raced on the track as juniors, so it was fantastic to see them present on behalf of their fathers.

A COUPLE OF SPECIAL MENTIONS – ON TRACK

Firstly Team Loftus – great to see the brother and sister team finish in the top 5 – and get a maximum score in one heat, when Anika led home Jordy in a fine team ride – and also to Team SA’s Darcey Timmis & Kobi Canning – they were on point for a maximum in their 2nd heat when Darcey’s bike let her down while leading, with Kobi nearly taking her out before recovering to take the heat win.

Here is the final rundown from the 2022 CBS Bins Australian Teams Championships.

AND A COUPLE SPECIAL MENTIONS – OFF THE TRACK

A big shout out needs to go to Tracy Turvey for lifting the Championship up a level by live streaming the whole event over Facebook, with hundreds of people watching the action live from all around Australia, and even a few from overseas, like Scotland and mainland Europe. Hopefully all future Championships will follow suit and have live streaming for all those who can’t attend in person!

To Brian Tickle and his canteen crew, who kept everyone fed all weekend – Sidewinders can boast one of the best track side canteens going around here in SA, and they proved it once again with a great selection of hot and cold food and drinks available all weekend – and not to forget the sausage sizzle put on for all riders on Friday night as a welcome to the Championships – simply brilliant!

AND – FROM THE BRILLIANT TEAM AT SIDEWINDERS;

Not to steal anything from Bugs Bunny – but ‘that’s all folks’!

The 2022 Australian 125cc Speedway Championships have been run and won in both the Individual and Pairs and we can safely say it has been a MAMMOTH task!

To get our ageing ol’ girl into Australian Championship nick was no mean feat and behind the scenes there have been numerous people who have worked TIRELESSLY to ensure the event went off without a hitch. Those people are too hard to name as someone will undoubtedly be missed off the list, so from the Sidewinders Committee we say an ENORMOUS THANK YOU from the bottom of our hearts to EVERYONE who played a part in the events’ success – YOU KNOW WHO YOU ARE!

To the riders and their families who despite the ‘tough times’ we are still facing, travelled thousands of km (and those from SA as well who were a lot closer) to make their kids dreams come true – THANK YOU!

To the supporters who came to the venue and supported the riders and to those who watched on Facebook from afar – THANK YOU!

Don’t forget that now the event is over that if you want a piece of Speedway history to contact Mick Hargreaves directly for DVDs and to keep an eye on Terry Scriven (Terry’s Pro Shots) and Mike Gerlach’s (JDM Photos) Facebook pages this week for all of the photos!