You are here: Home / News / TROY Series SA, GLENMAGGIE & NATIONAL TRIALS DAY – IT’S ALL HAPPENING OUT ON THE ROCKS!
Back

SA’S AWESOME RAID OF THE PODIUMS AT THE GLENMAGGIE EASTER CLASSIC!

With the SA season to start this weekend in Victor Harbor, a number of SA’s finest trials riders warmed up for the season and did a sneak attack across the border at the Glenmaggie Easter Classic Trial.
SA riders managed 3 first placings, 1 second, a fourth and a seventh from the event. Father & son, Steve & Josh Rees led the way, with Steve coming out on top in Masters and Josh winning Trial 3 (B Grade), a brilliant result for the 16 year old.
The 3rd win was by Peter Arnold in Veterans, holding off the fast finishing Don Murray from the ACT, with Australia #2, Connor Hogan 2nd outright in Trial 1 (Expert), behind Tim Coleman, who was having a rare ride these days – but was playing in his backyard.
Another excellent result was from World Championship bound Lillie Yiatrou, who was 4th in Trial 3 (B Grade), only 6 points off the podium, and in front of former Australian Champion, John Rees.
Also having her first ride at Glenmaggie was Melissa Bruce, who finished an excellent 7th in the highly contested Trial 4 (C Grade) Class.
Congrats and well done to all of Team SA that made the long trek to Australia’s biggest annual trial outside of the Aussies. 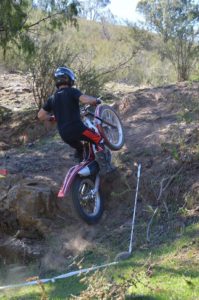 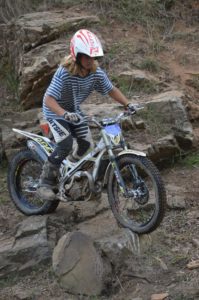 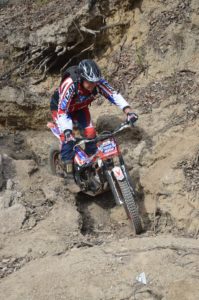 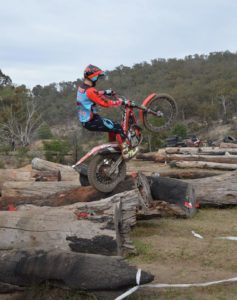 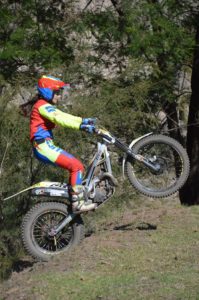 On the back of the success by SA riders at Glenmaggie and after the family ride days 2 weeks ago at the same venue, the TROY Series SA 2019 kicks off this weekend at Victor Harbor with round 1 of the 5 round Series. Started in 2010, Troy Series SA was instigated to be a great addition to the yearly calendar and to compliment the stand alone SA Championship event, and now in its 10th year, TROY has become a great Series, with this year it being a 5 round Series, with rounds 2 – 5 being run from the end of July through to September by the Gawler, Keyneton, AJS & Velocette Clubs.
In action this weekend at round 1 will be SA’s 2 World Championship bound riders, Connor Hogan (Trial2) who will be flying out next weekend for the Scottish Six Day Trial, and Lillie Yiatrou, who will be debuting in the Trial2 Women’s World Cup in the 2nd half of the year.
With trials somewhat unique to the other disciplines, with only 1 rider in a section at a time, it means juniors can compete directly against seniors and this will be happening en masse, with Lillie being joined by Haydon Barwick in the Trial 3 (B Grade) Class, current Australian Champion Hayden Eardley in Trial 4 (C Grade), with Youth (under 19) riders Alex Cowan & Josh Rees debuting in Trial 2 (A Grade) this weekend.
Perhaps the class to watch this weekend may be the Junior B Class, Trials SA’s youngest stars and what could be a boys verses girls battle as well – as Oliver & Harry Lancaster, Isaac Schultz and Harry Peterson take on Ashley Barwick, Lucy Cowan and Hayley Stephen.
The future of trials here in SA certainly looks bright with the amount of talented riders under the age of 20 – and the majority are in action this weekend at Victor!
The event is free to all spectators, who are able to wander around the sections and get up close and personal to the action, and there will be catering by the awesome Café Dee Wheels, with their homemade burgers, complete with their homemade chutneys – which are worth the drive to the event on their own!
Just turn right at the roundabout at the Urimbirra Fauna Park on the main Adelaide to Victor Harbor road, and the distance to the Trial site is 15.7 Kilometres and should take around 13 minutes, and will be signposted from the Waitpinga Road roundabout, Victor Harbor. 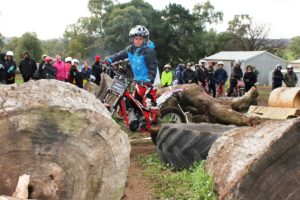 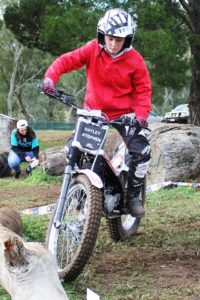 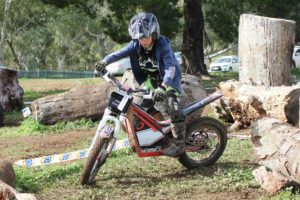 3 of SA’s outstanding junior riders who will be in action this Sunday @ Victor Harbor, Ashley Barwick, Hayley Stephen & Harry Peterson

2019 once again sees Australian teams struggling for funding, so the trials community of Australia have taken the bull by the horns, and led by SA’s peter Arnold, are running the 2nd annual ‘National Trials Day’, where each state runs a trial on the same day, with all proceeds going to getting Team Australia to the Trials des Nations.
The SA National Trials Day will be held at Tungkillo, with free entry once again to spectators, who will also be able to donate to the team, or buy raffle tickets for the team raffle.
It also might be a good idea to note that SA has 2 riders in the 2019 Trials des Nation’s Team Australia, Connor Hogan for the fourth year running and debutant, 15 year old Lillie Yiatrou, as well as Lillie’s dad, Andrew, who will be one of the team minders.
Get out to Tungkillo on Sunday May 5th to help get our riders to Spain in September – and watch Lillie in action on the day as well (Connor will be in Scotland riding the Scottish 6 Day Trial). 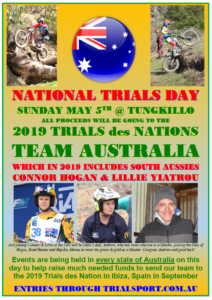 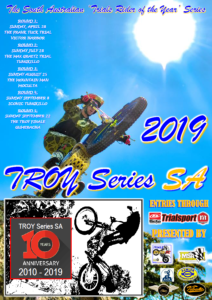